MAPJ once again calls for resignation of Commissioner Marvin Rodriguez

MAPJ once again calls for resignation of Commissioner Marvin Rodriguez 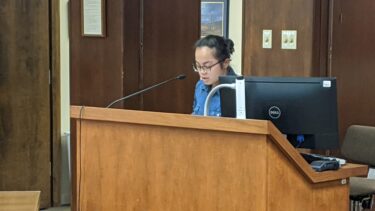 Members of the Manhattan Alliance for Peace and Justice called for the resignation of Riley County Commissioner Marvin Rodriguez during Thursday’s Riley County commission meeting.

This is due to the comments Rodriguez made during the special meeting on March 18. These comments are being seen as racist since he says the risk of COVID-19 is low in the county due to “not having any Chinese.”

One of the members, Fanny Fang, is the daughter of Chinese immigrants and has been living in Manhattan for most of her life.

“When I heard of Commissioner Rodriguez’s racist remarks, it only reminds of the bullies who tried to justify their actions and make me feel ashamed to be Chinese and ashamed to be from Manhattan, KS,” says Fang.

Fang says she has had to hire a security team to protect her, her family, her business, and customers from potential hate crimes due to Rodriguez’s comments.

“He jeopardized the safety of his residents by spreading racist misinformation and putting a target on his own residents’ backs,” says Fang, “When leadership and the people are disconnected the community becomes ineffective.  Now more than ever we need leadership.”

Rodriguez responded saying his comments were not meant to racist or cause anger towards any group. He adds that his comments come from an article he read about the virus.

“My comments were not meant to discourage anyone. They were comments that i received off of national news about the work of Chinese people in Italy and China deliberately did what they did,” says Rodriguez.

Rodriguez believes anyone in this country who is a citizen is an American, not what their lineage is. He says his comments were made “more than what it was.”

“I come from a background that I have been discriminated against, but I don’t go around saying ‘oh woe is me.’ I apologize for the remarks and how they may have hurt people, but that’s not what I do and that’s not what I think,” says Rodriguez.

Rodriguez ended his comments saying he has some Chinese friends in the area and has eaten a lot of Chinese food in Manhattan. 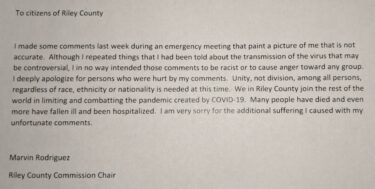 A letter of apology from Rodriguez was given to KMAN.  In the letter, Rodriguez states the comments he made paint a picture of him that is not accurate.  He calls for unity from all people in the county and around the world to combat the pandemic caused by COVID-19.  He ends the letter saying he is sorry for additional suffering he caused with his unfortunate comments.

Along with the call for resignation, the MAPJ demanded online video access for county commission meetings.

MAPJ Member Jess Kerr says the commission is not being accessible to the community by not having meetings available to view online.

“Mr. Rodriguez’s racist statements would not have come to light except the mayor of Manhattan happen to be at the meeting, heard it, and let people know about,” Kerr says.

Kerr says she has heard other inappropriate comments during meetings and states it becomes hearsay due to lack of transparency and access.

Because of the comments, Kerr believes the meetings need to be live streamed . She also mentioned the meetings take place in morning while people are working, making it even harder for citizens to attend and comment.

Commissioner John Ford responded by saying they are currently working through the process to establish some kind of video streamed meetings.

“We have legalities and some other things we have to follow, for instance I can’t Facebook live the meeting because I’m an elected official. We are going to continue to dialog, but I’ll tell you right now; that isn’t the number one priority, getting through the crisis is” says Ford.

Ford says the public can also email the commissioners for comments. He did however agree they are a bit behind when it comes to video streaming meetings.

The current petition for Rodriguez’s resignation has over 200 signatures.

About the Author: Sam Hennigh